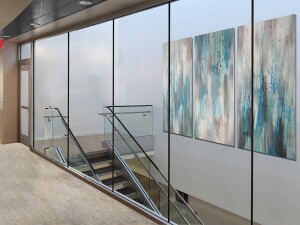 When Apple’s iconic Fifth Avenue store first opened in 2006, its glass cube easily became one of New York City’s most photographed structures.To push the envelope on transparency even further, the cube was renovated in 2011 by reducing the number of individual glass panels from 90 to 15, making it almost invisible.

Not to be out done, Microsoft also incorporated extremely large glass panels for its flagship New York City store, also on Fifth Avenue.

The trend towards achieving total transparency with oversized pieces of glass with little or no conventional framing is also becoming the norm in specialized systems such as fire rated glazing.

Advancements in the manufacturing technology behind fire rated glazing in recent years are making this a reality. Back when wired glass was the only fire rated option, its applications were limited to small sizes, restrictive fire ratings and non-safety glazing locations. Fire rated ceramics came into the marketplace touting wire-free appearance, larger sizes and fire ratings up to 3 hours. However, just like wired glass, ceramics fail to prevent the passage of radiant heat. This makes wired glass and ceramics unsafe for use for the vast majority of wall applications requiring fire ratings over 45 minutes. The International Building Code (IBC) imposes clear limits on their allowed applications.

To achieve total transparency – no wires, no amber tints, nor any inherent size and application limitations – a far more advanced type of fire rated glass that outperforms wired and ceramic glass is being used. Not just for aesthetics, but because at higher fire ratings (beyond 45 minutes) and at larger sizes, the building codes require fire rated glass to meet ASTM E-119, which limits the passage of radiant heat to no more that 250 degrees F over ambient. This type of glass, called fire resistive glass, can be used in wall-to-wall and floor-to-ceiling wall assemblies, storefronts and curtain walls up to 2 hours. When combined with an equally rated framing system, designers can achieve maximum transparency with maximum fire protection.